Fiesole was my unplanned day-trip out of Tivoli. Villa Adriana (Hadrian’s Villa, in English) was my planned day trip out of Rome. I’d even go so far as to say it was one of the major inspirations behind this entire holiday.

The word ‘villa’ today means something fairly modest. In Bangalore, it means a four-bedroom home with a pocket-handkerchief sized lawn which costs a king’s ransom even when located outside the outskirts of the city. Even if you expand your horizons a little, it only means something like a manor house – 15-20 rooms and a few acres of grounds.

The villas I studied about, of which Villa Quintili was representative, were much bigger and more productive. They employed hundreds of people and produced more than they consumed.

Hadrian’s villa took the term villa to another plane altogether. It was more of a town than a villa. In India, it would be comparable to Mandu or Hampi, but it predates those by more than a thousand years. It might have been more ornate than those monuments, but was thoroughly and systematically stripped both by humans and by the ravages of time. 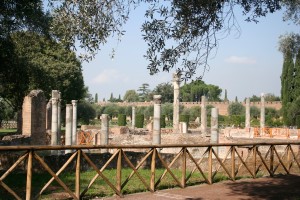 Getting to Hadrian’s Villa was not as easy as getting to Fiesole. Even with my passion for walking everywhere, I didn’t intend to attempt the 27 km from Rome to Tivoli by foot. So I followed the instructions in Lonely Planet ant took a metro to some place called Ponte Mammolo, then a bus to Tivoli. This took about 75 minutes, starting at 7.45 a.m. I was pleased. I thought I’d get on the local bus from Tivoli to Hadrian’s Villa by 9.30, and be there by 9.45. The nearby cafe told me where I could catch the bus, just across the street, but neglected to mention that I needed to buy a ticket for that bus. When the CAT 4 bus finally rolled in around 9.30, he took one look at my ticket and threw me off the bus. The ticket I’d bought in Rome, which I’d understood would work in Tivoli, apparently did not work on this bus.

Great. Now I’d waste another half hour waiting for the next bus.

The bus driver, however, informed me that another bus would come along in ten minutes.

Ok, that was better, just enough time to zip across the road, get a ticket, and zip back.

Except, when I got in to the shop across the road, and waited an interminable couple of minutes while the person behind the counter dealt with another customer in a leisurely manner, I was told, bus ticket? Yeah, sure. Oh, sorry, we’ve jyst run out of them. Try the shop down the road.

I tried three shops down two different roads, but people kept pointing me back to this shop. One gentleman went so far as to take me by the arm and actually point out the exact shop to me, so I couldn’t miss it.

As I stumbled further down the street, I passed a grubby man doing some grubby repair working in front of a pizzeria that appeared to be closed. Without any real hope, I asked him for bus tickets. He didn’t understand me. He asked me if I wanted to go to Villa Adriana. I didn’t understand him. Somehow, a line of communication was established, money exchanged hands, and I became the proud owner of not one, but two bus tickets for the CAT 4. After all, I’d have to come back soon, and I didn’t want to face this same run-around for tickets at the other end again.

I charged back to the bus stop and waited impatiently. It took another half hour to get into the bus, get off ten minutes later, and march 15 minutes down a lonely little road to the ticket office. After I’d got my ticket, there was another 10-minute hike uphill to reach the actual entry to the ruins. It was 10.15 – two-and-a-half hours after I’d left home. And budgeting a similar time to get back meant I’d have to leave by 4.30; anyway, the site closed at 5. I didn’t have much time.

For the first time in my life, I took the audio guide. I hate taking guides, either live or recorded. They put me under pressure to go where they tell me to, when they tell me to. Besides, I don’t want to be talked at, not even by a recording. Give me written information, which is easier to absorb, retain, and carry away in the form of printed brochures. It seems I’m hopelessly old-fashioned.

I whizzed around trying to identify all the points on the audio guide’s itinerary and ingest all the audio-guide’s information. At 1 p.m., I marched all the way down to the main gate, returned the audio guide with a huge sense of relief, regained possession of my passport (which was kept as collateral against the audio guide) with relief, and headed back up to wander around the site at leisure.

There are way too many structures in Hadrian’s Villa to be worth describing at length here – I’d have to write a book to do it justice. But it was lovely because there was just enough of the structures left to imagine what might have been, and few enough tourists. My only regret was that I didn’t have more time. Still, by wandering around busily and happily, at the end of three hours I was satisfied that I had seen all there was to see of Hadrian’s fantastic villa, and by 4.30 I was on my way home. It had been a good day and the weather gods had smiled on me. It was the perfect end to my trip. On Saturday morning, I made an early morning (well, early-ish) excursion to the Pantheon to beat the crowds, ate one last gelato, and then I packed my bags and left.

Will I ever go back? I don’t know. There are, of course, things left undone. And I did throw a coin or two into Fontana di Trevi, so maybe, maybe…