If you haven’t been to the Flickr photo album yet (or even if you have) here’s a visual feast (or at least I think so).

view from the top of the Duomo, the heart of Florence.

The Duomo, seen from the faraway Piazzale Michelangelo

The front of the Duomo. It’s too big to fit in one picture, so this is the best I could do…

The river Arno, seen from across the river 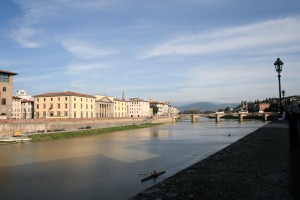 David. The most fabulous nude male I have ever seen. (Ok, I haven’t seen that many…)

Fiesole, outside Florence. It’s a beautiful walk, I just wish it weren’t quite so long. 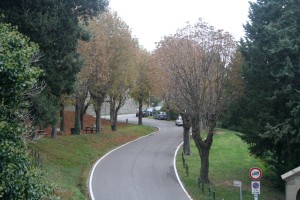 The Roman Theatre in Fiesole. This is why I study archaeology in my non-existent free time.

Arches, Fiesole. Aren’t they just lovely? I really like arches and columns.

If you know where you are…

…and where you want to go…

…but you don’t know how to get there… are you lost?

On Tuesday, my second day in Florence, at the end of my sightseeing for the day, I packed away my Lonely Planet, which has all the maps I need. Then I walked away from Santa Croce, intending to catch a bus to the station, and from there a bus back to the youth hostel.

Soon, I was lost. I was in a bus-less area. I walked and walked and finally caught sight of some buses. I reached a bus stop and studied the route map, but didn’t recognize any part of it.

By this time, I was a little worried, because I was on a very big and busy main road with signs pointing to Autostrada, Venice, Siena, and so on. There weren’t many pedestrians around.

It gets dark around 7, and I like to be ‘home’, or at least in the vicinity of home, before dark. Getting lost at 6, is not something I like to do.

So I took out my phone and turned on GPS. I hadn’t used it much so far, because on the first day in Rome, I used it for half an hour and two things happened: my prepaid card ran out of money and my phone ran out of battery.

But this was an emergency, so I turned it on and asked for directions to my youth hostel. Straight down this road, it said. 3.7 km.

I did the math: it would take me about an hour to walk. Finding out about buses and changing multiple buses? Could take longer. And the last stretch of half-km or so I’d have to walk anyway.

So I walked it.

It wouldn’t have been much of an adventure except that my phone was low on battery when I started. And it’s true that it said straight down this road, but it wasn’t entirely straight.

I trudged off, wondering if I could trust the GPS and wondering whether the battery would last till I got to some area I recognized.

It was a long, tense walk, and the battery finally gave out while I still had 1km to go. Soon after that, I asked someone and it turned out the GPS was wrong after all. It wanted me to loop around a long way, when actually the entry to the youth hostel was just around the corner!

So I was saved by a timely combination of GPS navigation and a low battery. I reached my room just after 7.30, well after dark.

Oh, wait, that was only one getting-lost story. The others? Will follow, another day…

Still Way Too Much

This whole experience is mind-boggling.

The good thing is that this is my second trip to both Rome and Florence. I know some of what there is to be seen. I know that there are things I don’t want to do.Last time we were here, in my 25-year-old enthusiasm, I was determined to go everywhere and see everything. I thought I might never come back and I never wanted to say, oh no, we were there but we missed seeing that.

Second because… I don’t think you can take in all that Rome and Florence have to offer even in a full year, much less in a week. It’s like trying to understand Delhi in a week. It can’t be done, not if you want to do it properly.

Now, ten years on, I know a few things. I know that I get quickly overwhelmed by richly painted and sculpted interiors of churches and museums. Museums, in fact, bore me to tears. I’m no connoisseur of art, or sculpture, and never will be.

So I’m giving the whole Vatican a miss. Gasp???? But, I mean… You stop seeing anything almost as soon as you enter, it’s so much visual overkill. And the world-famous Sistine Chapel? Well, I’ve seen lots of pictures of it…

Of course, that doesn’t mean that I didn’t go to St Peter’s Basilica. Technically, it is part of the Vatican, but it’s different. The piazza outside is just huge and spacious and wonderful with its graceful colonnades where everyone sits and chats, and it’s big enough so that, in normal circumstances, it’s never crowded.

I happened to be there at 5 p.m. on Sunday afternoon, so on a whim I sat through Vespers. They allow tourists to wander around far from the altar even when service is on, but if you profess to want to attend the service, you must sit in the pews and attend. No photography.Fair enough. I attended. I’m not religious, so it didn’t matter that I didn’t understand a word of what was said. There was a choir, that was good enough for me. All men, of course. A lot of people walked in after the service had begun, some of them locals. A few people left before it ended. It only lasted half an hour, so I sat through it, and even dropped a coin when they came around asking.

The Pantheon is a church I loved when we were here the last time, but when I went there on Saturday at 5, they were just closing. Hopefully, I’ll get in once before I leave.

In Florence, I went into the Duomo, of course, and did the obligatory climb to the top. I got a good view of the upper levels of the interior, that was enriched by my recollection of Ken Follett’s Pillars of the Earth. I went into Santa Maria Novella, Basilica (or was it Chiesa) di San Miniato, and Chiesa di San Orsanmichele. The last named bowled me over with a fantastic altar of intricately carved gilded wood. Apart from the altar, it was the simplest of buildings, two arches front and back and three arches on either side, no aisles. According to the literature, it was used as an open grain warehouse,before being enclosed and converted to a church.

San Miniato, at the top of a hill, was also very simple and nice, with a crypt that was behind the altar and half underground. Later, I saw a similar crypt in another very simple and early church, in Fiesole.

Lesson learnt: I like my churches simple on the inside, with focus on the architecture and the altar and minimum distraction from irrelevant richly detailed painting and sculpture. I’m ok with richly-decorated exteriors that can be admired (and photographed; too many places don’t allow any photography at all) from afar.

Even with this handful of churches under my belt, I’m already having trouble remembering which was which.

Why won’t they allow photography? The altar at Orsanmichele was so mind-blowing, how can I possibly hope to remember it without a single photo?

Outdoor archaeological sites are easier to absorb and retain. And, of course, to photograph. The Colosseum is difficult, or impossible, to forget once you’ve seen it. The Roman Forum, with its mess of ruins scattered over a vast area was captivating and exhausting. And the ancient Roman and Etruscan ruins in Fiesole were also enthralling, though too few.

The nice thing with outdoor sites is that it’s easy to linger. You can find a nice rock and sit down in the sun, or, if the weather merits, in the shade. You can much, sip, read,shoot, and talk on the phone. The only trouble is if it rains.

Museums are good places to hang out when it rains, but if you have to stand in queue 45 minutes and then shell out 10€… Maybe not.

On the other hand, I couldn’t come to Florence and not meet the real David (there are two fakes as well, all right here in Florence). Besides, I had to say hi to him on Supriya’s behalf, she had specifically requested me to. So I queued up to meet him and gazed at him from every angle adoringly for half an hour. What a hunk. No photographs, of course, not even after shelling out €10. Then, I quickly whizzed out of the museum before the naked splendour of David could be dulled by millions of other splendid bits of sclupture. Really, once you’ve seen the best, why bother with all the rest?

Still, as before, despite my best effort to take it in slowly and in small installments, I know I’m going to leave here overwhelmed, bewildered and enriched.

Perhaps, unfortunately, the experiences that will stay with me the longest from this trip will be those of getting lost. So far, there have been three of them.