When I got up this morning and looked at the little critter, I thought she was dead. She had shrunk visibly the past couple of days. When Diwali firecrackers were exploding all around us, she didn’t even flinch. But when I sat down next to her this morning and stroked her tiny body, one of her back legs twitched. She wasn’t dead yet.

But she would be, soon. And I couldn’t have her lying at my doorstep. I’ve picked up one dead kitten in the recent past. I know how not nice it is. So I got a scrap of olive green cloth, remnants of a tablecloth that had had way too much food over the years. I laid her gently on the green cloth. When the time came, it would be easier to pick her up.

As I worked my way through making and serving breakfast, I told myself I would toss her on the pile of leaves outside. She would die and decompose there, without stinking too badly. It’s not as if she was the only little kitten around, after all. We currently had three queens. Bread, with a litter of four, one of whom had been killed by dogs, so down to three, but those three now quite viable. (And cute – that goes without saying.) The Lil Girl, who had three, of which this one knocking on heaven’s door was one. The other two looked strong and healthy. They were now exactly two months old, and smaller than Bread’s kittens, but catching up fast. And then there was the Sleepy Eyes. She had delivered her second litter recently. There were three, but now there are two. I don’t know what happened to the third, but considering it was still blind and couldn’t move, she must have taken it and deposited it somewhere, presumably dead or dying.

So yes, births and deaths aplenty. And Piglet, the sole survivor of the Sleepy Eyes’s first litter, was still around, playing big bossy brother to all the other kittens and alternating between adopted son and suitor to the Lil Girl.

Black Head and Blue Eyes, Squint’s siblings. And Piglet curled up with the Lil Girl and all three kittens. 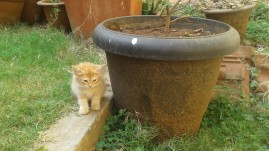 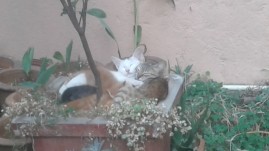 By the end of breakfast, I’d convinced myself that I wasn’t going to get involved. Let’s face it: Squint had always been the runt of the litter and she had something wrong with her eyes – at least one, maybe both. I’d thought it would fix itself, but maybe not. If nature didn’t think she was a survivor, and if her own mother wasn’t unduly concerned, and if we already had more foster kittens than one could shake a tree at…

But of course, I didn’t really have it in me to just sit back and watch a soul die. What if she had just a glimmer of a hope of survival?

How does one feed a dying kitten? She couldn’t even hold her head upright, much less actually eat something. Cotton wool dipped in milk is all very well when you read about it, but it’s damn tedious. I wasn’t sure we had cotton wool in the house. And it was a working day after all. I took one of my eye drop bottles and prised the dropper off it. I rinsed it and dribbled some warm milk into it. The bottle only held 10 ml, but it turns out that’s a lot for a kitten, under the circumstances. And so it started.

At first, Squint was too weak to swallow. I held her head up with two fingers and squirted the milk into her mouth. Some went down, some went out. When I went back a couple of hours later, she could swallow. She opened her mouth, rooting for her mother’s teat. The eye dropper wouldn’t do as a substitute, but the cow’s milk was acceptable. By lunch time, she could move her head, but by then she didn’t like the milk anymore. I don’t really approve of force feeding anyone, but honestly, there wasn’t much force involved.

By mid afternoon, she was ready to stumble around a few steps at a time. And by evening, she had stumbled in stages from the front porch to the back garden. She was also able to make it clear by then that she didn’t like milk being squirted down her throat, thank you very much. Not that that got her very far. The milk was clearly helping.

Her litter mates were quite outraged with all the attention that she was getting. If there was any milk going, they could dispose of it quite well, didn’t I think? And without so much mess. They went and licked every molecule of milk off Squint’s fur. It would have been sweet, if it weren’t so despicable. Luckily, Squint’s mother was a little more concerned. She wandered over to give Squint a good licking, and not just for stray molecules of milk, I believe. But cats are prosaic creatures (or do I mean stoic?). The Lil Girl wasn’t too worried that one of her babies was fading fast. She just got on with scavenging for food, getting her me time, and tolerating her other two kittens. Apart from checking in with me if there were any unexpected goodies coming her way, it was business as usual for her.

Only Piglet, surprisingly enough, stuck close to Squint. He’d curled up next to her as she declined over the past two days, and when she finally stumbled into the back lawn late in the day, it was Piglet that she curled up next to. He didn’t care for milk molecules on her fur either – Piglet had his good food sources all sorted.

At last, when the Lil Girl reappeared after her afternoon snooze, Squint mewed quietly and stumbled up to mommy and asked for milk. The Lil Girl seemed inclined to wander off, but that was too much for me. I told her to lie down and do her duty for once, for heaven’s sake. And she did, for a while.

Squint still refused any milk or water or scraps of boiled chicken that I offered (of course, there were plenty of other takers for those, apart from the water), but the fact that she had sought out her mother was encouraging. And yet, she didn’t look well on the way to recovery yet. She didn’t look as if she would die any moment, as she had in the morning, and clearly she could move about a bit, which was a big improvement over not being able to raise her head, but still… Her eyes keep getting encrusted and I’m not sure she can see at all. If she can’t see, or even if she can see with only one eye, she’s not long for this world, that’s for sure.

This entry was posted on Friday, November 9th, 2018 at 6:37 pm and is filed under personal. You can follow any responses to this entry through the RSS 2.0 feed. You can leave a response, or trackback from your own site.