On Walking and Hiking and Getting Lost (or Not)

The first task of the day was to get to the grocery store and lay in provisions. There’s only one grocery store here, of course, and we’d passed it on the way in. I knew from the map when I made my bookings that it’s less than 1 km away. Basically you just get to the main road, turn right and walk till you get there. Simple, even by my visual-spatially challenged abilities.

I set off and after walking for 45 minutes I knew I was lost. Don’t ask me how. I’ve tried to figure it out subsequently, but it’s impossible. There must have been a space time warp leading to a very specific wormhole opening up just outside my hotel that sent me off to a parallel universe. Luckily, Mr Google was on hand to get me back to the appropriate universe. Oh yes, I had a SIM card by now. I asked my taxi driver as we were passing through Ivalo and 30 seconds later we had pulled up outside a koski. Sixty seconds and 3.90 euros later, we were back on the road with a prepaid SIM in my hands. Of course, I made something of a production of getting the SIM into my phone, but we’ll take that part for granted. After 45 minutes of sweating and swearing, it worked.

If it hadn’t, I’d probably still be wandering around that parallel universe, wondering how I’d got there and how I was going to get out.

Anyway. Once I’d got back with groceries and gobbled a salad and salami for lunch, it was time to go out exploring again. I walked to the Sami museum, Siida, though I knew it would be closed. I discovered a path going down alongside the lake and followed it a long way just because it was so beautiful. The lake was frozen and a few snowmobile and ski tracks crisscrossed over it. The path was covered in a thin layer of snow, having been cleared recently. The sun was slanting in through the trees. The world was devoid of human life forms again. It was fabulous. And I even found my way back without really getting lost. 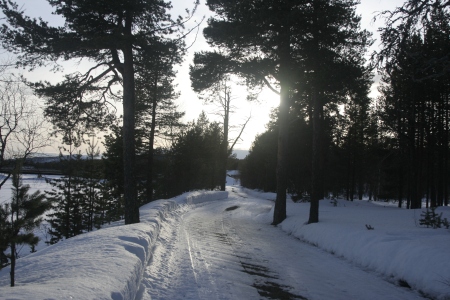 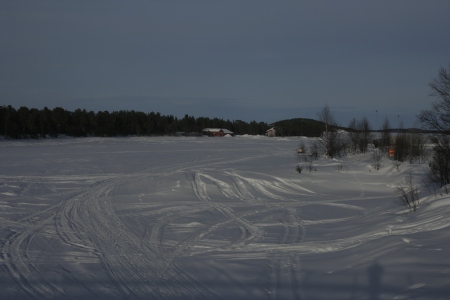 The next morning I wanted to go back to Siida, but it would open only at 10 and I was up and looking for adventure by 8. Not knowing what to do, I exited the hotel and turned right, away from the main road, thinking that I’d just wander around for a bit. That’s when the first bit of magic happened. I came across the local school. It was a huge surprise that a place as small as this merited its own school and apparently quite a large establishment too. But the magic was what lay a little ahead of the school. Jutuua polka. The Jutuua trail, through the woods and along and across the river. A mere 6.3 km, the signboard said.

I wasn’t sure if it meant 6.3 km each way or round trip and whether this was a there and back again trail or a trail that started somewhere and ended somewhere else. Was I letting myself in for a 12 km hike?

Who cares? The trail beckoned and off I went.

The Jutuua trial was fabulous by any standards, but particularly by the standards of what followed. The first stretch had been cleared by a machine, so it was smooth and easy to walk on, a thin layer of packed snow an inch off the earth. On the sides the snow was piled high, but that didn’t matter aside from creating ambience. With the surrounding countryside piled deep in snow, it was as if I walked in a valley with hills on both sides. The slopes were peppered with trees and the slanting rays of the sun cast beautiful golden light in streaks. It was magic.

If it had occurred to me to worry about getting lost, my fears would have soon been allayed, because there were frequent markers all along the path. And I’d walked a mere 2 km when I came upon the first laavu. This is described as a lean-to, but it’s actually a tent shaped structure made of wood and quite tall, so you can stand inside. One side is open and there’s a nice fireplace with a barbecue attached. Just bring your own matches and meat. Wood? It’s in the shed across the path. Sacks and sacks of it, neatly chopped and tied up. What more could anyone want? Oh, yes, there is one thing… And that was to be found right next to the wood shed. A toilet! A wooden toilet with a wooden bin full of wood shavings. A composting toilet, of course. With a window in the door to let in light and to let you know if anyone is approaching. They think of everything, these guys. 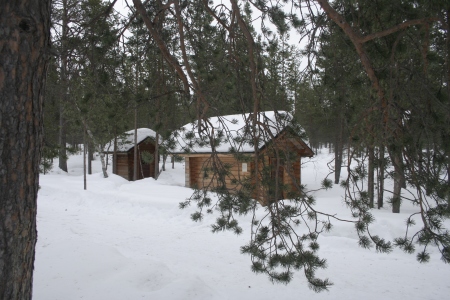 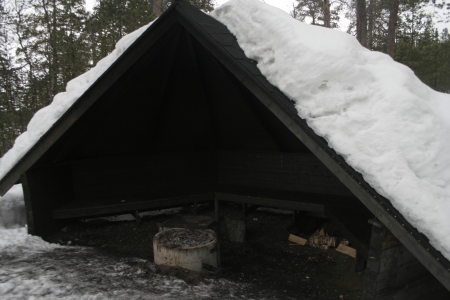 The track went on and after a bit, there was a bridge. A proper metal suspension bridge. On the other side, another lean-to. Pass that, and then the broad, machine-maintained track gave way to a narrow trail. Here the snow had been tramped by feet. Still beautiful, still easy. Still signposts along the way to tell you where you are and where you’re going. Just a little more wilderness, a little less evidence of human life forms. Complete silence and stillness. Not a sound or a movement apart from the occasional cheeping of birds.

Four magical kilometers later, I was back at the road right opposite the museum.

This entry was posted on Tuesday, May 1st, 2018 at 8:12 pm and is filed under twins. You can follow any responses to this entry through the RSS 2.0 feed. You can leave a response, or trackback from your own site.