The London Diary from The Wall

The next day was for my dear friend, Hadrian. The Emperor, I mean. The guy whose villa I have visited a couple of times in Italy. He had a bit of a wall in England, I’d heard, and I thought I’d go and look him up over there, just to say hi.

My original plan was to do a walk. The trail I’d chosen was from Housesteads to Housesteads, taking in several milecastles and the fort at Roman Vindolanda along the way. It was supposed to be 7 miles or so, which sounded eminently doable.

I’d met up with Rajashree at Newcastle when I got back from Durham. She was coming from a week at London and Edinburgh. We spent the evening talking and doing laundry. The laundry took ages – partly because we started by putting the clothes into the dryer and then wondering why it wasn’t washing and deciding we’d just leave it to do its thing and wandering off for an hour to chat and have dinner. When we got back and found everything dry as a bone, we were delighted – until someone asked us if we were done with the dryer. Well, we put the clothes into a washing machine after that and wandered off again, and when we came back an hour later, they were done but sopping wet, so we took them out and put them in the dryer again. But this time, no matter what setting we tried, the damn things just didn’t get dry. After a couple of hours we gave up and went to bed. By that time, it was past midnight. We’d intended to step out and buy something for breakfast the next day, but what with the laundry and the dinner and the chatting, we just didn’t get around to it.

So the next morning when we got up and left the hostel bright and early at 7.30 a.m, not only did we not have any dry clothes, we didn’t have any food for breakfast or lunch either. Rajashree being vegetarian and me being gluten intolerant, we weren’t the easiest people to find food for in England. Rajashree had bought bread and jam, which she took along, but for me there was only bananas, and I don’t think even I can walk 11 km in one day on the strength of a couple if bananas. I’d have to be bananas to try it. (Sorry, sorry, couldn’t resist that one.)

We got on a bus to Hexham and at Hexham we wandered around looking for food. It was only 7.30 a.m and a Sunday to boot, so all we really got was a bottle of water. Then we were on the bus to Housesteads.

By about 10.15, we started walking. It was wild and open and deserted and lovely. We walked – and in many places stumbled – along the wall for a couple of hours, making excellent progress till we met a family with a different map, who gaily informed us that we were going in the wrong direction. As usual. Sigh. I’m famous for this. Oh well.

We made it to the top of a nearby high point, drank some water and juice, and trudged back. It was too late to start walking towards Roman Vindolanda now, it was already 1 pm, and I think we’d both had enough of the ‘walking the wall’ experience anyway. It was lovely countryside, but it was hot and sweaty and in many places there was no path and when there was, there were also notices asking you not to walk on the path but to walk on untrampled grass instead, which was tough going.

So we spent some time lingering at the Housesteads Roman Fort, then went back to the road and caught the Hadrian’s Wall bus to Roman Vindolanda. Much easier than stumbling over untrampled grass along the wall.

There’s really nothing I can say about either Housesteads or Roman Vindolanda. Both were forts, excavated, unearthed, one might say. Both were lovely in a ruined way. Both had an entry fee of more than 6£, but I loved both places. The rest, the photos will say. 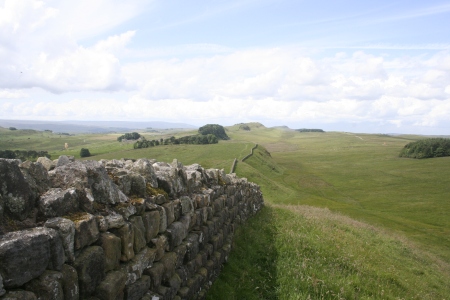 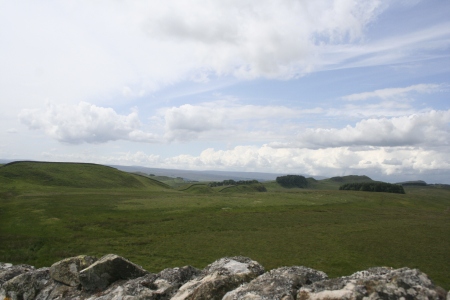 We were done with Roman Vindolanda by about 4 pm and the next bus back to Hexham was due around 5. I suggested that we walk to the next point on the bus route, which was called Once Brewed. I didn’t remember reading much about Once Brewed, but I figured there must be some small thing we could see in half an hour or so and be done by the time the bus came to pick us up.

I guess it was not of my brighter ideas.

The walk to Once Brewed was fraught with tension as, from the mid point onwards, we both began to wonder whether we were going in the right direction. We had a map and we had been pointed in this direction by the folks at Roman Vindolanda, but after 20 minutes of walking when we still couldn’t see any sign of anything except cows… Well, you do start to wonder. Especially if you’ve already taken one wrong turn that day. And, like I said, I’m famous for these going-well-but-in-the-wrong-direction escapades.

Of course, this time we were going in the right direction, as confirmed by GPS, a passing cyclist, and the eventual sighting of Once Brewed itself. But, and this is the real crux of the matter, when we finally arrived there at 4.40 tired and footsore, we found out that there really was nothing to see or do over there. It was just a visitor centre. I had a pleasant chat with the woman at the counter and we both used the loo, but it didn’t seem to justify the hot and tiring 40 minutes from Roman Vindolanda, when we could have stayed put and enjoyed the sights there for a while longer. Which is to say, read up before you head out.

I had survived the Hadrian’s wall outing fortified with nothing more than a banana, an ice cream, and a bit of puffed rice. That evening, we got back to Newcastle determined to stock up on groceries for dinner and the next days breakfast. Like all best laid plans of men and mice, this one promptly went awry. It happened to be Sunday (yes, still!). We’d seen what Saturday meant in England, as we watched an endless mass of humanity parade by, dressed to the nines and determined to party. Now we saw what Sunday meant. There was nobody out on the roads, and every shop was shut up tight. We headed hopefully to Tesco, but even that was closed. The only places open were KFC and McDonalds. And a little kebab place where an Indian man couldn’t understand my request for gluten free food till a local guy interpreted. Strange. At any rate, I feasted on a box of vast quantities of lamb slivers and fat potato chips doused in garlic mayonnaise.

And now I really want to be back there again – walking the wall, trudging to Once Brewed in the heat, and finally gorging on an unbelievable quantity of meat and potatoes. If only…

This entry was posted on Tuesday, July 22nd, 2014 at 9:20 am and is filed under travel. You can follow any responses to this entry through the RSS 2.0 feed. You can leave a response, or trackback from your own site.

2 Responses to The London Diary from The Wall