As most of you know, we are building a house. Amit is in charge of the project, and I mainly exercise veto power – which I use sparingly (in my opinion). That explains why we’ve ended up with a mud brick construction and just narrowly avoided composting toilets that flush using sawdust instead of water.

The deal is that he’s in charge of the plan and execution, I’m in charge of interiors. Of course, with pale pink mud brick making up in every square inch of every wall in every room, there’s not a lot one can do with the interiors, but I have plans (and I’m not saying a purple sofa won’t feature – anything to liven up the place).

The one thing we’re both fighting over, however, is neither the building itself, nor the interiors – it’s the garden space. When I say “garden” I really mean the little strips of open space at the front, back and sides. We don’t have a farmhouse, after all, or even a mansion – just a small plot hemmed in on all sides by other small plots with big houses. So there’s not a lot left over for the “garden” – so inevitably, what there is, we’re fighting over. Amit, obviously, wants his precious vegetable garden. I’ve promised him the four-foot strip on the west side of the plot. In return, I get the front, the ten-foot driveway on the east, and the 6-foot back yard. Fair and square, don’t you think?

Mud brick is a deadly boring thing, all earthy pale pink and drab as could be. One can’t paint over it, so what I plan to do is to add colour by way of creepers, where possible, and trees. I’m not much into flowers – silly, pretty little things. I like my plants to be big and grand and stately. Amit is pleading for a mango tree, but I also need some colour – apart from green. So here’s what I’ve planned. 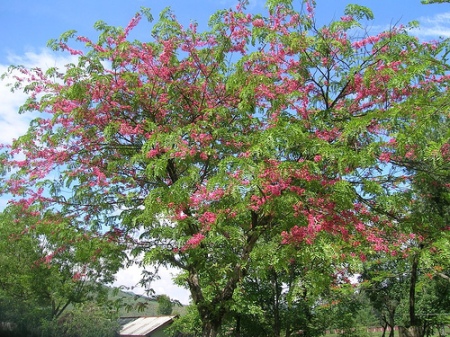 Aren’t they gorgeous? It’s going to be Cassia Fistula (yellow), Delonix Regis (orange/red), and Laburnum Mimosaefolia (purple) in front, and at the back, a gigantic Cassia Javanicus (pretty pink).

The laburnum, jacaranda, and gulmohar were no-brainers. The trees are breathtakingly lovely when they flower and they all flower around the same time. They’re all common in Bangalore, so I know they’ll grow well and I know roughly the size and shape they grow to. And I can just see them crowding up the front, right corner of our little plot – a bright burst of colour on the second-floor level and a lovely mosaic of colour on the ground.

The Cassia Javanica is a tree I didn’t know anything about – other than the fact that it grows in Cubbon Park and if you happen to be driving down Cubbon Road at the right time of year and stop at the Minsk Square intersection, it’s quite possible to wish that the light wouldn’t change for a few weeks, just so you can drink in the sight in peace. It’s an absolutely glorious specimen, and the fact that it towers above and delicately frames the statue of King Edward the whatevereth (who I always thought was King George the somethingeth, but was disabused of the notion by this article) doesn’t detract from its charm at all.

Now if you consider the footprint of each tree and then consider the canopy of each tree, I’m not sure that our little plot actually has the space to accommodate all four trees. Remember there is supposed to be a house there as well. But by the time Amit is done with his mud brick construction, I will need a splash of colour to make the place worth living. Orange, yellow, purple, pink, that’s all. That’s really not too much to ask, is it?
———————
Photos from the following websites:
http://usagi-hideaki.deviantart.com/art/Cassia-fistula-tree-210109906
http://justmylittlestory.blogspot.com/2011/07/gulmohar-tree.html
http://www.treknature.com/gallery/photo188831.htm
http://www.flickr.com/photos/20353348@N00/860662692/sizes/m/in/photostream/

This entry was posted on Wednesday, September 21st, 2011 at 8:39 pm and is filed under personal. You can follow any responses to this entry through the RSS 2.0 feed. You can leave a response, or trackback from your own site.

4 Responses to Not Too Much?